Tim Burton’s groundbreaking 1989 film BATMAN not only redefined what a superhero film could be, but introduced the world to a bold new look for the world of Batman.

The 1989 Batmobile was designed by Anton Furst. Wanting the car to be unlike any previous incarnation, he produced a combination of brute force and classic design aesthetics that reflected the films’ Art Deco version of Gotham City.

Long, low and sleek, it was a Batmobile unlike any other. Not only did it win the hearts of fans worldwide, but it also garnered an Academy Award for Furst for Best Production Design.

Now Mezco presents the 1989 Batmobile in Mez-Itz form. Perfectly scaled for the 2inch 1989 Batman as portrayed by Michael Keaton, it features a removable roof so Batman can fit comfortably inside. With tinted windows and freely turning wheels, this is a sleek ride fit for the guardian of Gotham.

The Mez-Itz 1989 Batmobile and Batman figure come packaged in a sturdy die-cut window box, perfect for display in your personal Batcave.

There are no reviews yet.

Be the first to review “1989 Batman and Batmobile” Cancel reply 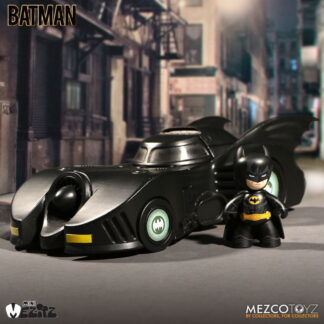